Continuation of the eHealth project implementation

effectiveness of the eHealth project implementation 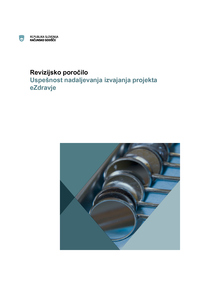 Effectivenes of the continuation of the eHealth project implementation

The Court of Audit of the Republic of Slovenia audited operations of the Ministry of Health already in 2013, when it expressed the opinion that eHealth project management was ineffective. Due to existing problems in implementing eHealth project, the Court of Audit decided to carry out a follow-up audit in order to review effectiveness of the project implementation. This audit covered the period from 20 March 2014 to 31 December 2016 and examined operations of the Ministry as well as the National Institute of Public Health that took over the project during the period covered by the audit.

Until 1 December 2015, by the date when the Ministry was responsible for the implementation of the eHealth project, 20 IT solutions were set up. Among others: IT solution eRecept for issuing e‑prescriptions for medicines; IT solution eNaročanje for electronic scheduling, making specialist healthcare appointments and keeping waiting lists; Central Register of data on patients and web portal for insured persons zVem. Furthermore, the Ministry set up a private healthcare network zNet and server infrastructure that supports IT solutions of eHealth project.

The Ministry altered eHealth project several times since it was established in 2009, i.e. in terms of content and technically, without justifying its decisions by using a cost-benefit analysis, projections of number of users and an assessment of financial consequences.

The Ministry's statements concerning eHealth project status did not reflect the actual situation, since the Ministry in brochures and on its website presented some IT solutions of eHealth project as fully operational, on the contrary, they were not applied or their applicability was only partial.

The Institute made substantial efforts to promote applicability and made evident progress. In December 2016 there were 85 percent of all prescriptions issued by using IT solution eRecept. IT solution Telekap offered support to doctors who treated more than 1,500 patients at a distance.

During the audit, however after the period covered by the audit, also other steps were taken. Namely, from the beginning of the year 2017 the public was able to access the web portal zVem, in addition thereto also electronic register on vaccinations eRCO was used more widely. The Institute improved the input mask of the website eNaročanje in April 2017 and developed instructions for the users. The Institute promoted application of the Central Register of data on patients among the healthcare service providers. In January 2017, the Ministry requested all healthcare service providers to immediately make the necessary arrangements for applying IT solution for scheduling at eNročanje. In September 2017, the Institute developed a conceptual plan and timetable of activities for full applicability of all IT solutions under eHealth project.