Government Office for Development and European Cohesion PolicyMinistry of FinanceMinistry of Economic Developement and TechnologyMinistry of Labour, Family, Social Affaires and Equal OpportunitiesMinistry of Environment and Spatial PlanningMinistry of InfrastructureMinistry of Education, Science and Sport 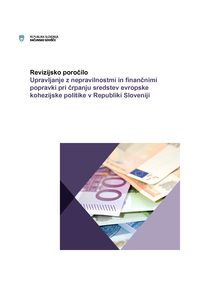 In line with the European rules, the EU Member States must adopt necessary measures to protect the financial interests of the European Union. They have to particularly ensure correct and efficient implementation of measures and to prevent, detect and eliminate irregularities and fraud. Irregularities that occurred during implementation of operational programmes must be eliminated and financial corrections must ensure that all expenditure declared for co-financing from the Structural Funds and the Cohesion Fund is in accordance with the applicable rules and regulations. Additionally, amounts unduly paid must be recovered to the EU budget. The Court of Audit thus examined whether an adequate overview of the detected irregularities was provided, whether the competent authorities took appropriate actions in the case of detected irregularities, whether the financial corrections were considered in reporting on effectiveness of absorption of the EU funds and whether the implementation of financial corrections reflected in the State budget in order to provide correct information on the absorption of cohesion policy funds could be obtained.

European rules stipulate that the EU Member State shall take measures to claim unduly paid amounts from beneficiaries and to commence an appropriate recovery procedure if required. When amounts unduly paid to beneficiaries cannot be recovered, the Member State concerned shall be responsible for reimbursing the amounts lost to the EU budget when it is established that the loss has been incurred as a result of its fault or negligence. Otherwise the burden may be shared between the Member State and the European Commission. On the sample of previously detected irregularities the Court of Audit concluded that the ministries as intermediate bodies mainly called for the beneficiaries to recover unduly paid funds, however, this could be done within a shorter period of time.

Intermediate bodies issued beneficiaries calls defining different deadlines for repaying funds; furthermore they used different methods of calculating interests on late payments. Beneficiaries in more than 95 percent of cases repaid the funds, when the amounts of irregularities were smaller. When the amounts of the irregularities exceeded EUR 10,000, they repaid funds in less than 40 percent of cases. In most cases when beneficiaries did not repay funds, the intermediate bodies tried to claim funds from them through judicial procedures. From the total amount of the funds not recovered from the sample in the period covered by the audit, there were procedures before a court still pending for 83 percent of not recovered funds. The Court of Audit disclosed two cases when an intermediate body, in the period covered by the audit, did not demand repayment of funds from a beneficiary due to disagreement with a supervisory body regarding irregularities. Furthermore, the Court of Audit found out that in certain cases recovery procedures did not start because authorised state bodies assessed unlikelihood of successful recovery of funds through judicial procedures.

The Member State must recover unduly received funds to the EU budget. The EU legislation provides that unjustified expenditure can be withdrawn from the programme immediately or after the recovery of funds from the beneficiary. The Court of Audit concluded that there was neither clear guidance for deciding which procedure should be used by certifying authority nor the legal basis, guidelines and instructions clearly providing that in the Republic of Slovenia the certifying authority is the authorised body that can adopt such decisions. Every procedure differently impacts not only the burden accepted by the State budget due to irregularities but also the possibilities of fully absorbing the available funds. The amounts of expenditures recovered can be committed to finance other projects. If this occurred latter in the programming period, there would be fewer possibilities to timely implement the project and for better absorption of available funds.

In order to provide for more effective absorption of funds, the Republic of Slovenia decided to finance more projects than there were available commitments in the EU budget. The Court of Audit assessed that this decision as well as unduly financing, namely expenditures causing irregularities, up to the end of the year 2015, caused the State budget additional burden for the implementation of the operational programmes, i.e. between EUR 56,972,606 and EUR 193,742,161 that shall not be recovered from the EU budget. Additionally, an appropriate amount of the national co-financing must be considered. The burden of the State budget is reduced correspondingly after the recovery of funds from the beneficiaries. Following the agreement with the European Commission on the burden sharing in case of irrecoverable amounts, it could be even minimised. The Court of Audit concluded that individual repayments of funds could be identified, while the total amount of the repayments by the beneficiaries was not reviewed by the managing authority respectively Ministry of Finance.

The Court of Audit expressed an opinion that audited bodies and institutions in managing disclosed irregularities and financial corrections related to absorption of the European Cohesion Policy Funds within the 2007-2013 programming period were partially efficient.

The Court of Audit issued several recommendations to improve efficiency of the future activities. Among others it recommended that the managing authority should set up centralised records of data related to detected individual or systemic irregularities within central IT system; managing authority and the Ministry of Finance should design a system providing that at least at the end of the programming period it could be possible to identify the amount of the irregular payments concerning the programming period and thus the burden of the State budget.