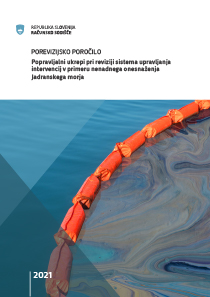 The documents are available only in Slovenian language on the Slovenian site. 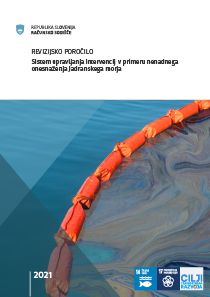 The Court of Audit implemented the audit reviewing whether the system of managing interventions in case of sudden pollution in the Adriatic Sea in the period from 1 January 2017 to 31 December 2019 was efficient. The audit was a part of the international parallel audit involving Supreme Audit Institutions of all countries along the Adriatic coast.

The system of managing interventions in case of sudden pollution in the Adriatic Sea involves several stakeholders, while the audit reviewed those that carry the main responsibilities to develop this system, namely the Ministry of Infrastructure, the Ministry of Defence, the Ministry of the Environment and Spatial Planning, the Maritime Administration of the Republic of Slovenia, the Administration of the Republic of Slovenia for Civil Protection and Disaster Relief, the Slovenian Environment Agency, the Slovenian Water Agency and Luka Koper, port and logistic system, public limited company responsible for preventing and fighting sea pollution within the area of a cargo port in Koper.

The Court of Audit found out that the auditees are focused on various measures preventing the occurrence of accidents and consequently pollution of the sea, and that they carry out those measures as well. It, however, pointed out some weaknesses, such as: implementation of the public utility service of maintaining infrastructure for the safety of sea navigation was based on a 17-year-old concession contract. The system of hydrological and meteorological measurements and for providing data necessary for safe navigation at sea was upgraded but was not fully set up. While carrying out maritime pilotage and harbour towage difficulties occurred that could also affect the safety of navigation at sea. In order to remedy disclosed issues the authorised auditees already adopted some measures. Between the years 2017 and 2019 there were 2 cases of emergency related to grounding of tankers. If those accidents caused an oil spill, the consequences could result in a catastrophe for marine environment and also for the coast. An important step towards the improvement of safety in the maritime transport is opening of the marine traffic control centre in 2021. In order to reach the desired level of monitoring and control over the maritime transport, it is necessary to approach towards listing of contents and possible amendments of the legal bases.

The Court of Audit disclosed that procedures to be used in case of pollution of the sea are defined. Smaller scope of pollution is managed by regular units and services of the auditees within their powers, while procedures related to larger scope of pollution are defined in regional plan of protection and disaster relief operations when accidents occur at sea. Thereby, the Court of Audit found out that responsibilities of those that have the permits to use water, i.e. harbours, related to cleaning and remedying water pollution including the tasks of removing collected waste and substances were not always defined in the issued permit. Also the responsibilities for cleaning the coast and offshore areas were not clearly defined. The auditees did not clarify the legal bases enough for the Maritime Administration of the Republic of Slovenia and the Administration of the Republic of Slovenia for Civil Protection and Disaster Relief to be able to impose on the polluters the costs of activities undertaken when fighting the pollution of the sea.

Education and training of the participants involved in the interventions are carried out regularly, i.e. in the Republic of Slovenia as well as abroad, in the form of drills open to a wide range of participants what was pointed out by the Court of Audit as positive practice. In case of sudden pollution at sea, good cooperation among all stakeholders authorised for preventing sudden sea pollution and for intervening when pollution occurs is a crucial precondition for effective and efficient responding mainly in cases of a major emergency. According to the assessment of the Court of Audit, it would be appropriate that auditees implement drills also to check response time in cases of dangerous chemicals pollution whereby they could review the availability of necessary equipment to be used and personal protective equipment for such type of pollution.

In the event of a major emergency the auditees would ask each other for help, when their capacities for temporary storage of collected waste and substances are filled. The Court of Audit found out that there was no protocol defined when capacities of all are filled. Additionally, the location of common temporary disposal of waste was not selected.

On the basis of the implemented audit, the Court of Audit issued an opinion that the system of intervening in case of smaller scope of pollution was partially efficient. Special attention should be placed on the field of mobilisation in case of major emergency which was not efficient in the opinion of the Court of Audit. In this context, the key element is good cooperation among all stakeholders with powers in the field of preventing sudden pollution at sea and powers to intervene in cases of pollution in the Republic of Slovenia. According to the opinion of the Court of Audit, the aforementioned is a necessary precondition for efficient and effective responding in cases of sudden pollution at sea, especially in the events of major emergency. Furthermore, full commitment to cooperating with the international community is of vital importance, since any major pollution along the Adriatic Sea can represent a significant ecological threat to all countries on the shores of the Adriatic Sea.