Ministry of Agriculture, Forestry and Food Ministry of Environment and Spatial Planning 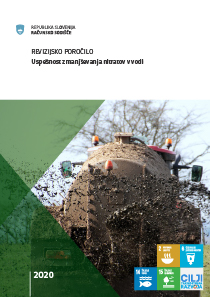 When implementing the audit on efficiency of long-term drinking water resources conservation in March 2019, the Court of Audit of the Republic of Slovenia detected that excessive nitrate levels in water are one of the significant causes of drinking water quality reduction. Since excessive nitrate levels in water (not only drinking water) have negative effects on human health and ecosystems and consequently on biodiversity, fisheries, tourism and other activities, the Court of Audit decided to carry out a new audit in order to review in detail the activities of the Ministry of Agriculture, Forestry and Food and the Ministry of the Environment and Spatial Planning concerning the effective reduction of nitrate concentration in waters in the period from 1 January 2014 to 31 December 2018.

The Court of Audit expressed an opinion that the Republic of Slovenia was partially effective in reducing nitrate concentration in waters in the period covered by the audit.

The Ministry of the Environment and Spatial Planning supervised the situation and trends in nitrate concentration in waters by state monitoring. The measurements revealed that waters in the area of Dravska kotlina basin, Murska kotlina basin and Savinjska kotlina basin, as well as in the part of Basin of Savska kotlina and the Ljubljana marshes and Krška kotlina basin have been in poor state for several decades. At the measurement points where the allowable levels of nitrates were exceeded in 2018, the trends do not show any improvements, especially in the area of Dravska kotlina basin the situation remains unchanged, while on Krško polje plain the upward trends were detected. The Ministry of the Environment and Spatial Planning also monitored the nitrogen emissions from agricultural sources at the national level by calculating nitrogen balance. To this end, the Court of Audit pointed out that in Slovenia net nitrogen surplus from agriculture is being reduced less intensively in the last 10 years compared to the previous years and in narrow areas often even moved beyond the environmentally acceptable limit. Additionally, it draw attention to the poor access to data on nitrogen surplus per agricultural holding and on insufficient knowledge of soil properties which may affect the planning of appropriate respectively necessary agricultural measures.

In the field of agriculture mandatory measures were implemented as defined by the decree on nitrates, nevertheless they provide minimum water protection against nitrates. Agricultural holdings carried out also voluntary measures in the field of rural development and some measures in the water protection areas as well as in the field of production and application of compost and digestate. Inspectorates authorised for agriculture and environment and the Agency of the Republic of Slovenia for Agricultural Markets and Rural Development nevertheless found out that regulations were not followed in all the above fields. The Court of Audit pointed out that environmental permits in the field of production of compost and digestate were not always harmonised with the valid legislation. The Ministry of the Environment and Spatial Planning already prepared a plan of activities for remedying those weaknesses. The Court of Audit also stressed that risks were not considered enough when controls were carried out by the inspectorate for agriculture. Furthermore, it highlighted the important role of the farmers and their education as well as the links between agricultural activities and environment when achieving the effects in the respective field.

The Ministry of the Environment and Spatial Planning and the Ministry of Agriculture, Forestry and Food reported on the implementation of measures and evaluation of their impacts on waters in several documents.  The Court of Audit pointed out some shortcomings in those documents, such as the contribution of the measures implemented to the reduction of nitrate concentration in waters were poorly demonstrated and there were shortcomings in connecting data from the field of environment and agriculture. The Ministry of Agriculture, Forestry and Food failed to sufficiently support and promote major changes in the agricultural practices that could prove to be vital for reducing nitrate concentration in waters, furthermore it failed to adequately focus on the polluted areas.