Regulating the area of virtual currencies in the Republic of Slovenia

To express an opinion on the efficiency of the Ministry of Finance in regulating the area of virtual currencies in the Republic of Slovenia. 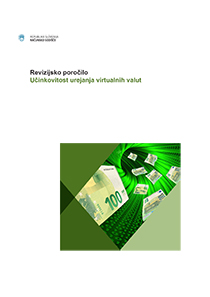 Virtual currency is defined as a digital representation of value issued by natural or legal person that is not central bank or public institution. It is used as means of exchange, can be transferred, stored or traded electronically and not necessarily attached to a fiat currency and can be accepted by natural or legal persons as means of payment. Virtual currencies are not guaranteed by a state and have the function of the currency only due to an agreement among their users. Virtual currencies in the last several years gained wide range of users and became well recognised and often used, for that reason the Court of Audit decided to undertake the audit to review how the Ministry managed risks related to virtual currencies in the field of money laundering, financing terrorism and taxation.

Office of the Republic of Slovenia for the Prevention of Money Laundering (hereinafter referred to as: the Office), a subordinated body of the Ministry, in the period covered by the audit undertook several activities in the field of virtual currencies and thus had a positive impact on risk management related to money laundering, specifically where exchange of virtual currencies into classical currencies or contrary took place. Nevertheless, in that period the Office did not receive any notices of suspicious transaction from the liable persons and thus did not implement controls at those persons.

According to the Court of Audit opinion the tasks and authorities of those liable and the Office in preventing money laundering and financing terrorism are defined in order to provide for immediate action of all involved and thus contribute to prevention of suspicious transactions  in traditional  currencies also when they are a consequence of suspicious transactions in virtual currencies.

The Ministry did not propose specific regulations on taxation of virtual currencies, nevertheless it provided explanations of existing tax legislation with regard to operations with virtual currencies considering the nature of business within the current legal framework. Financial Administration of the Republic of Slovenia (hereinafter referred to as: FURS), a subordinated body of the Ministry, in cooperation with the Ministry issued several explanations of tax treatment of virtual currency business operations. Providing explanations of tax legislation regarding virtual currency business operations had a positive effect on tax liabilities, but those explanations should be complemented. Taxable persons who failed to report their tax liabilities could be detected by FURS mainly by using analyses of income and expenditure of an individual taxable person and notices, later it could undertake action and implement controls if necessary. By 30 June 2018, FURS charged for at least € 26,685,911 of taxes to taxable persons.

The Republic of Slovenia set a strategic objective in 2018 to become a country of innovative start-ups also by encouraging activities in the field of virtual currencies, namely via smart controls, and the Ministry followed relatively well the objectives related to those controls.

Since virtual currency operations are undertaken in the virtual world and among individuals from different countries, traditional mechanisms of combating money laundering and preventing terrorism financing as well as tax evasions are not as efficient as when reviewing traditional business operations. The Court of Audit estimated that the Ministry’s efforts in combat against money laundering and tax evasions could efficiently continue by promoting coordinated international approach to eliminate possibilities for anonymity when carrying out business operations and by defining reporting on transactions in virtual currencies.

The Court of Audit proposed several recommendations to the Ministry in order to improve its efficiency.