Ministry of Environment and Spatial PlanningMinistry of Agriculture, Forestry and Food

To express an opinion on the efficiency of protection against invasive alien species. 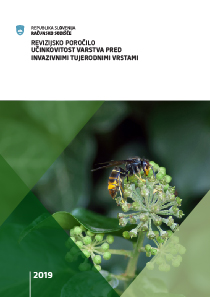 The Court of Audit of the Republic of Slovenia audited the efficiency of protection against invasive alien species in the Republic of Slovenia in the period from 1 January 2016 to 1 June 2018 (period covered by the audit) at the Ministry of the Environment and Spatial Planning and the Ministry of Agriculture, Forestry and Food. Invasive alien species are animals, plants, fungi and microorganisms that pose threat to or have significant negative impacts on biodiversity. They can also cause several other harmful effects, e.g. on health, infrastructure, forestry and agriculture.

The Court of Audit expressed an opinion that both auditees were partially efficient in providing protection against invasive alien species.

Although preventing and managing the introduction and spread of invasive alien species are regulated by the European legislation since the beginning of 2015 and despite ever increasing amount of funds spent for the concerned activities, the Republic of Slovenia still has no powers and responsibilities of relevant stakeholders defined in 2019.

This is, in accordance with the opinion of the Court of Audit, the main reason that the protection against invasive alien species was not provided in the scope as it could be respectively the protection was not efficient enough.

For 13 species which were in the period covered by the audit already spread widely, to a limited extent or were only occasionally present in the Republic of Slovenia the measures for managing their introduction were implemented unsystematically. However, 5 invasive alien species were included in the existing systems for managing wildlife or fish, 2 invasive alien species were included in the public institutes’ annual programmes of work pertaining to the field of nature conservation respectively fishery, and for the remaining alien species the measures were either implemented within the framework of individual projects or were not implemented at all. During the audit, there were 2 invasive alien species newly detected in the Republic of Slovenia (red swamp crayfish, kudzu), which are included in the European list. Based on the actions taken, the Court of Audit in both cases assessed that the measures of rapid removal could be more efficient, for that reason, it is necessary to clearly define powers and responsibilities pertaining to the field of the concerned audit.

Introducing and spreading species is human responsibility, therefore, raising public awareness is of key importance. Activities for promoting awareness of the issue addressed were carried out by both ministries under audit by publishing relevant materials on their websites and also by co-financing thereto related projects.

The Court of Audit issued to both auditees several recommendations for improving their efficiency in the field of protection against invasive alien species, but did not demand the submission of a response report since the Ministry of the Environment and Spatial Planning prepared plans of activities for the implementation of corrective measures already during the audit procedure.