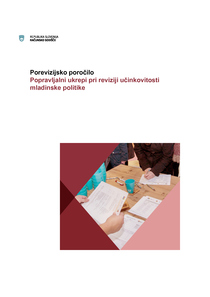 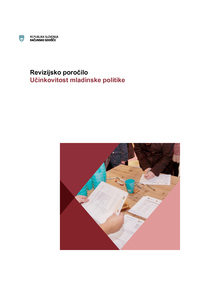 The EU classifies the youth field as part of national and local policy and encourages Member States to mutually cooperate in the concerned area. In the time of global economic crisis the Council Resolution of 27 November 2009 on a renewed framework for European cooperation in the youth field (2010-2018) brought to forefront horizontal issues of youth policy. The aforementioned Resolution together with Public Interest in Youth Sector Act served as the basis for the adoption of the Resolution on the National Youth Programme for 2013-2020. In 2014 and 2015, youth policy was in 99.5 percent considered as horizontal policy and aimed at integration of young people into economic community in various areas of life.

The Government, which shapes youth policy and is responsible for the existing situation and position of young people, established the Council of the Government of the Republic of Slovenia for Youth, a consultative and coordinative body for the field of youth sector. Youth policy is controlled by the Ministry, while the Youth Office carries out expert, administrative, organisational and development tasks relating to the youth sector.

The Court of Audit established that the existing rules and regulations did neither clearly define the tasks of bodies responsible for the achievement of public interest in the youth sector nor identify persons who are obliged and/or may cooperate therein and their obligations. Therefore, there was lack of cooperation between stakeholders in achieving public interest, especially between the national and municipal level. The Council of the Government of the Republic of Slovenia for Youth, the Ministry and the Youth Office did not perform their role as coordinators of youth policy between the national and local level appropriately, additionally, a coordinator of youth policy at local level was not foreseen in rules and regulations.

The Court of Audit established that oversight of the implementation of youth policy was not ensured. The Government, the Ministry and the Youth Office did not hold exact data on the amount of public funds allocated for the implementation of measures within the framework of youth policy at national and local level in the years 2014 and 2015. According to the available data, the main source of financing youth policy in 2014 and 2015 represented the state budget, namely 93.5 percent respectively 94.6 percent, while the total scope of financing varied between EUR 207 million and EUR 268 million. Other sources of financing, except for funds of the European Commission, were unused, as in accordance with the data acquired by the Court of Audit. The Government, the Ministry and the Youth Office did not dispose of data or an assessment of the scope of budgetary funds earmarked for the implementation of activities related to youth policy at local level each financial year. Additionally, financing of those activities at local level was not legally regulated.

Annual call for co-financing programmes of youth organisations and associations issued by the Youth Office is the key instrument for supporting and encouraging youth work and infrastructure. Available funds for co-financing thus amounted to approximately EUR 1,100,000 in 2014 and 2015. However, the Youth Office did not dispose of a document clearly indicating long-term development of youth work and infrastructure. As assessed by the Court of Audit, additional measures and permanent funding should be required in the field of youth work.

The Court of Audit demanded from the Ministry and the Youth Office to submit response reports where corrective measures to remedy the established irregularities and inefficiencies must be presented. The Court of Audit also proposed recommendations on the improvement of their operations.