Efficiency of monitoring and preventing damage caused by bark beetles

Efficiency of the auditees in monitoring and preventing damage caused by bark beetles. 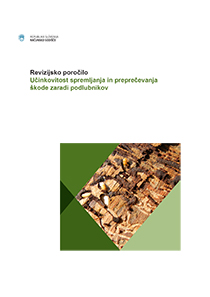 Efficiency of monitoring and preventing damage caused by bark beetles

The Republic of Slovenia is one of the most forested countries in Europe - forests cover more than 58% of its surface area. Management of forests is not only in the interest of the owners (three quarters of forests are private), but also in the public interest, therefore it is important that the state regulates this field efficiently.

In the past years, bark beetles (small insects that reproduce in the inner bark of spruce trees) have been proliferating wildly. Damage caused by these insects in the period from 2014 to 2020 is estimated to EUR 394 million. Climate changes affect the intensity of their proliferation as well as planting of certain tree species in the past (a deviation from the natural condition, due to economic reasons).

The audit revealed the following:

Due to forest management in the past, the area covered by spruce trees in Slovenia is almost four times larger than it would be without human interference. Forest Service plans to reduce the proportion of spruce seedlings in overall planting needs proposal in order to bring forests closer to their original, natural state. However, it is not yet clear which tree species shall be used instead of spruce trees since a consensus on the matter has not yet been reached.

Despite significant efforts, auditees have been only partially efficient in monitoring and preventing the damage caused by bark beetles. SAI Slovenia gave several recommendations to the auditees.