The mission of the Court of Audit is to inform the public and the National Assembly about important findings from the audits of operations of the users of public funds and, based on its experience and knowledge of good practice, to provide advice to the users of public funds on how to improve their operations. By disclosing irregularities and inefficiencies, it points to the responsibility of state bodies and holders of public office and thus serves for the benefit of all the citizens of the Republic of Slovenia and the European Union.

The mission of the Court of Audit as well as its audit powers, however, were uninterrupted even in this extremely extraordinary year 2020. In practice, new ways of working mostly affected our communication with the auditees. Despite that, the Court of Audit issued 64 audit reports in 2020, which is fully comparable with the previous years. In addition to audit reports, there were also 17 post-audit reports issued in 2020. Somewhat wider than in the previous years was also the scope of all audits since the reports addressed the operations of 139 auditees; total expenditure of all auditees in 2020 amounted to EUR 19.4 billion.

Among the issued audit reports in 2020, there is one of the most demanding audits implemented by the Court of Audit that has not yet been conducted in such scope by any other supreme audit institution in the world. The audit Implementation of supervision functions of the Bank of Slovenia among others tried to provide an answer to the question, whether the decisions of the Bank of Slovenia made in the recovery process of banking systems in 2013 were in accordance with relevant bases.

Maintaining an independent position of state auditors, safeguarding and developing their professionalism, deeply rooted principle of equity and especially an appropriate legal framework for the institution’s operation shall be of key importance for the future of the Court of Audit. The Court of Audit is and will be the protector of objective, independent and efficient control over public money. 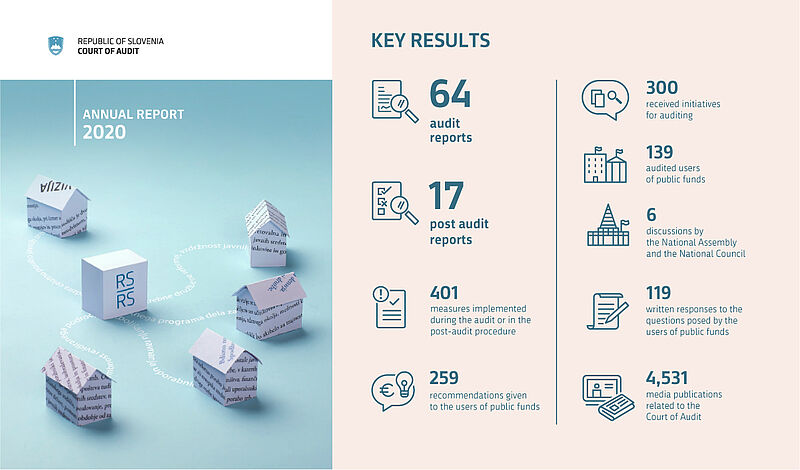